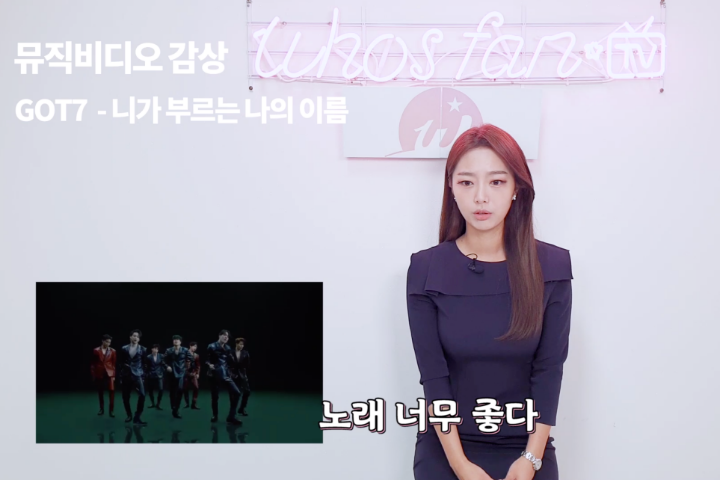 On November 12th, the YouTube channel ‘WhosfanTV’, operated by ‘Whosfan,’ a community platform for K-Pop fans all around the world, released the video of Hanteo Chart’s 2nd week of November Physical Album Chart TOP 10.

WhosfanTV’s official MC, the newscaster Jo Seo Yeon, reported that the 1st place in the 2nd week of November’s album sales was taken by GOT7’s ‘Call My Name.’ GOT7 express their own ‘sorrowful sexy’ concept through the title track, ‘You Calling My Name.’ Also, the song further captured GOT7’s individuality with prominent vocal lines compared to the previous title.

Through the video, Jo Seo Yeon newscaster watched the music video of ‘You Calling My Name’ and reacted to the song, dance, etc.

Along with the GOT7’s album, the higher ranks of the chart were followed by ’S.O.L’ by LEE JIN HYUK, ‘nostalgia' by VICTON, and more.

[New Release] VICTON Makes a Comeback After 3 Months with the Single Album 'Mayday'! "VICTON demonstrated super-fast growth - what will they show with this album?"

On May 22nd, group VICTON announced the comeback with the release of the scheduler image of the 2nd Single Album 'Mayday' on official social media and fan cafe. There is much attention on VICTON who is making a quick comeback after 3 months since the release of the 6th Mini Album 'Contin

The interview video,the follow-up of Episode TOO of 'WhosDOL,' was released on'Whosfan,' the global K-pop fandom platform. The guests in the second interview areTOO's Dong Geonand Min Su, and the two members gave witty answers to the questions in the interview. They exchanged

https://youtu.be/ll2E4fPBFOs On May 26th, the YouTube channel ‘WhosfanTV’, operated by ‘Whosfan,’ a community platform for K-Pop fans all around the world, released the video of Hanteo Chart’s 4thweek of May Physical Album Chart TOP 10. WhosfanTV’s official

https://youtu.be/SP3ueco128E On May 26th, the YouTube channel ‘WhosfanTV’, operated by ‘Whosfan,’ a community platform for K-Pop fans all around the world, released the video of Hanteo Chart’s 4th week of May Physical Album Chart TOP 10. WhosfanTV’s official