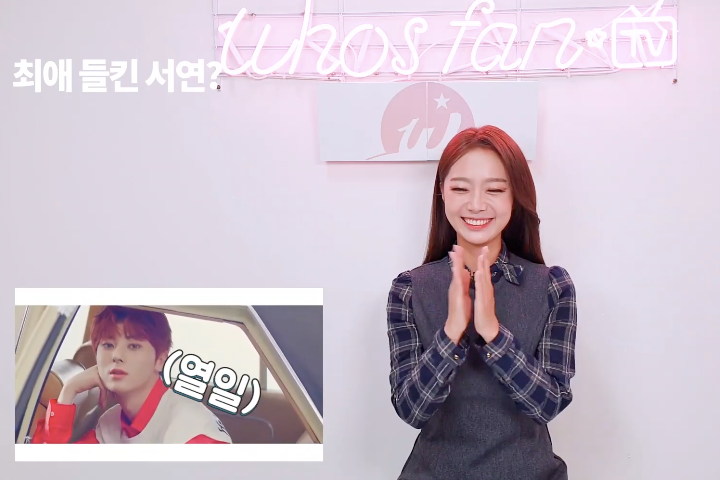 On October 29th, the YouTube channel ‘WhosfanTV’, operated by ‘Whosfan,’ a community platform for K-Pop fans all around the world, released the video of Hanteo Chart’s 4th week of October Physical Album Chart TOP 10.

WhosfanTV’s official MC, the newscaster Jo Seo Yeon, reported that the 1st place in the 4th week of October’s album sales was taken by NU’EST’s ‘The Table.’ Coming back after 6 months with the 7th Mini Album, NU’EST showed a different concept through the title track, ‘LOVE ME.’

Through the video, the viewers can check Jo Seo Yeon newscaster watching the music video and the dance practice videos of NU’EST’s title track, and getting impressed by NU’EST’s new concept and perfectly synchronized group dance.

Along with the NU’EST’s album, the higher ranks of the chart were followed by ‘The Dream Chapter : MAGIC’ by TOMORROW X TOGETHER(TXT), ‘The Book of Us : Entropy' by DAY6, and more.

[WhosfanTV] TOP 10 of the 3rd Week of June's K-Pop Weekly Physical Album Chart "IZ*ONE·Stray Kids·NCT 127 - album chart of 3rd week of June that excited the fans all over the world!"

https://youtu.be/C5VDJl0BOkI On July 6th, the YouTube channel ‘WhosfanTV,’operated by ‘Whosfan,’ a community platform for K-Pop fans all around the world, released the video of Hanteo Chart’s 3rd week of June Physical Album Chart TOP 10. The top of the Weekly Phys

NATURE Collaborates with DICO in Korean Education Contents for Global Fans with the New Song 'Girls' "Good influence as K-culture ambassador + shoots down the global fans hearts with perfect Spanish!"

https://youtu.be/FeM_P0fuQjw Group NATURE is leading the effort to share Korean culture with extraordinary activities. After making a comeback with the single album 'NATURE WORLD: CODE M' on the 17th of last month, NATURE joined the surprise content creation for the Spanish-speaking fa