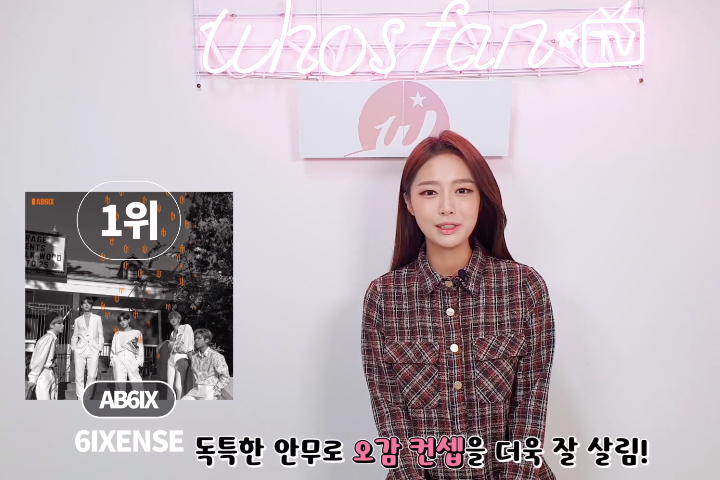 On October 15th, the YouTube channel ‘WhosfanTV’, operated by ‘Whosfan,’ a community platform for K-Pop fans all around the world, released the video of Hanteo Chart’s 2nd week of October Physical Album Chart TOP 10.

WhosfanTV’s official MC, the newscaster Jo Seo Yeon, reported that the 1st place in the 2nd week of October’s album sales was taken by ‘6IXENSE’ by AB6IX. Recording the weekly sales of more than 70,000 copies, ‘6IXENSE’ is the 1st full studio album of AB6IX. The album features a total of 11 songs including the title ‘BLIND FOR LOVE,’ and the members established their position as complete idols by participating in the making of all the songs.

Along with AB6IX, the higher ranks of the chart were followed by ‘TREASURE EP.FIN : All To Action’ by ATEEZ, ‘Dear my dear' by CHEN, and more.

Also in this latest video, Jo Seo Yeon newscaster enjoyed the articles and videos of AB6IX and ATEEZ through the Whosfan app.

The first unit of Red Velvet, the combination of IRENE/Seulgi worked. On July 9th, Hanteo Chart, the world's one-and-only real-time chart, officially counted and announced that Irene/Seulgi's 1st Mini Album 'MONSTER' has recorded the cumulative album sales of 108,908 copies on the

[WhosfanTV] TOP 10 of the 3rd Week of June's K-Pop Weekly Physical Album Chart "IZ*ONE·Stray Kids·NCT 127 - album chart of 3rd week of June that excited the fans all over the world!"

https://youtu.be/C5VDJl0BOkI On July 6th, the YouTube channel ‘WhosfanTV,’operated by ‘Whosfan,’ a community platform for K-Pop fans all around the world, released the video of Hanteo Chart’s 3rd week of June Physical Album Chart TOP 10. The top of the Weekly Phys