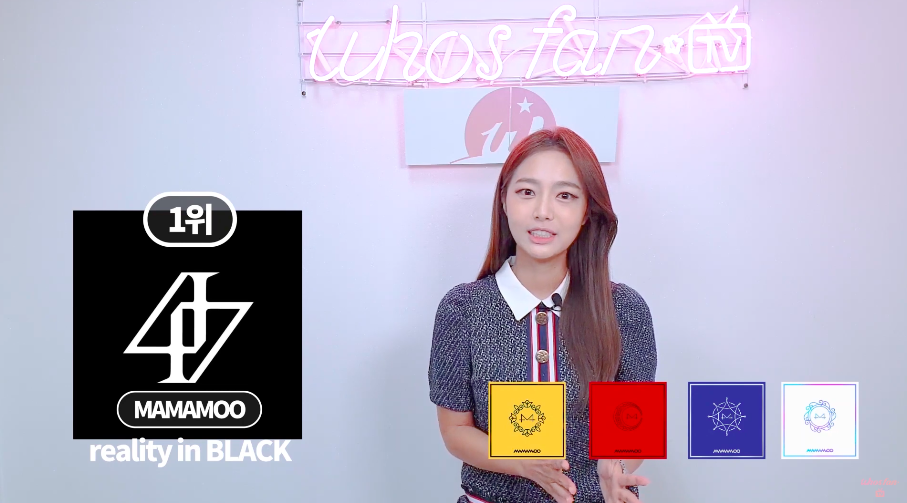 On November 19th, the YouTube channel ‘WhosfanTV’, operated by ‘Whosfan,’ a community platform for K-Pop fans all around the world, released the video of Hanteo Chart’s 3rd week of November Physical Album Chart TOP 10.

WhosfanTV’s official MC, the newscaster Jo Seo Yeon, reported that the 1st place in the 3rd week of November’s album sales was taken by MAMAMOO’s ‘reality in BLACK.’ Released on the 14th, the album ranked 1st in the weekly chart only after the 4 days since the sales started. The Initial Chodong (first week) sales counted by Hanteo Chart afterward recorded 70,000 copies, breaking the group’s own Initial Chodong record.

MAMAMOO showed the ‘multiverse’ as the concept of the music video of the latest title track ‘HIP.’ Through this, the members became a variety of characters from homemaker to president. Through the video, the viewers can check Jo Seo Yeon newscaster watching the music video and guessing the occupation of the MAMAMOO members.

Along with the MAMAMOO’s album, the higher ranks of the chart were followed by ‘An Ode’ by SEVENTEEN, ‘Call My Name' by GOT7, and more.